In November of 1985 my Dad bought a brand new Harley-Davidson Heritage Softail. His first NEW Harley after spending the previous 3+ years on a 82 Super Glide. 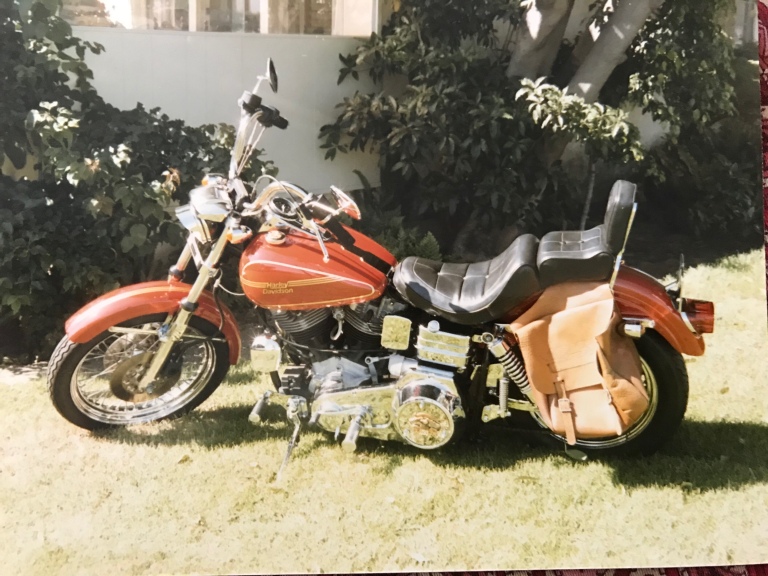 1986 was the first year for the Heritage and this specific color combo only had 2000 produced world wide.

Here’s one of my fave pics of him on that bike.  No helmet, no GPS, no windshield… just a map on A DIRT ROAD somewhere in the middle of Utah in 1986 .

And here’s one of my ALL TIME favorite photos EVER!  This is my grandfather sitting on the same bike in 1989 at my Dad’s place in SoCal. 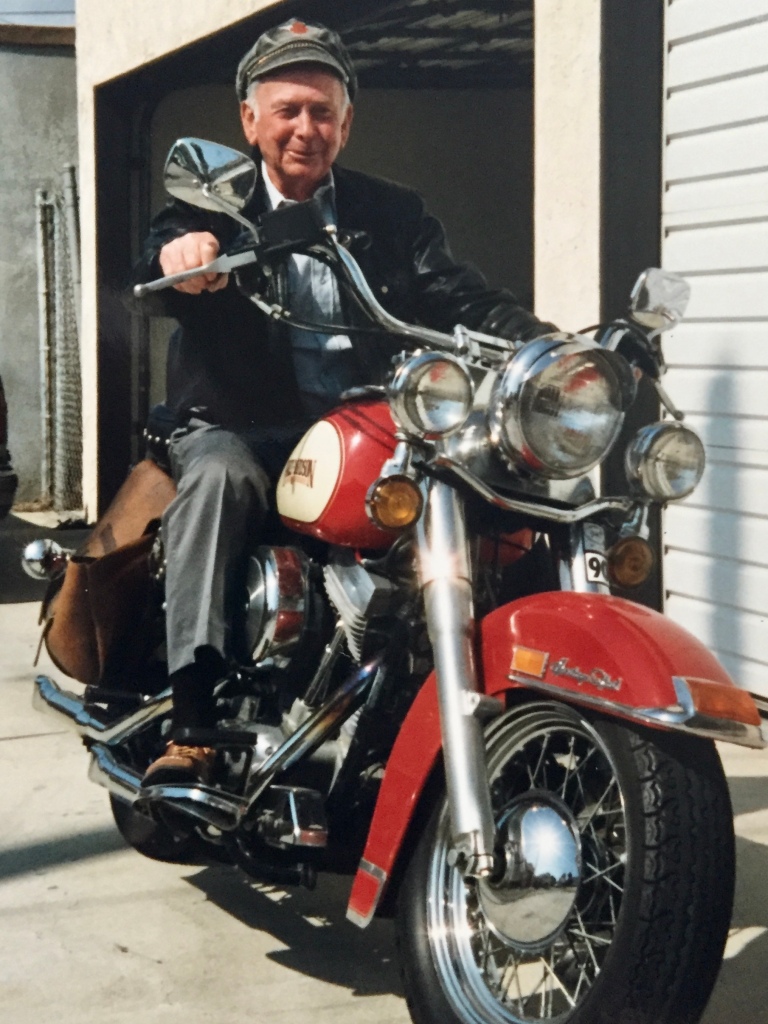 Dad and Ann (who took all these photos) actually gifted me a different version of this pic mounted on a laser cut stand that I’ve had sitting in my home studio for many years. This is absolutely one of my prized possessions. He was not only the best Grandfather ever but just simply a great human. 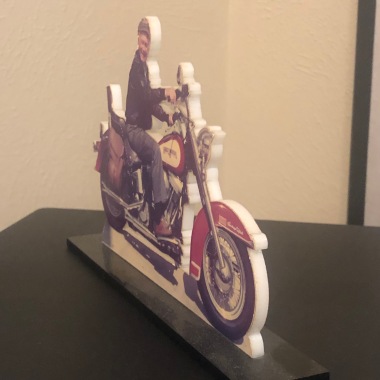 As I mentioned Dad sold the bike in 1995 and moved on to a 95 Road King which my brother eventually ended up with. He then moved to a 97 Road King which I ended up buying from him in 2002 . That was the first Harley I ever owned and what got me back into riding after a several year hiatus when I sold my 1979 Honda CX500 Custom. (which was a fun bike)
Here’s a shot of me on my 97 Road King on the Blue Ridge Parkway in 2004

I give you that back story because the 86 Heritage was always a special bike to me for a few different reasons. Not only a very cool looking bike but the photos of my Dad & Grandfather have always been pretty special to me. Plus, it’s one of the only bikes he’s owned that I never got to ride myself.
1986 was 35 YEARS AGO MAN and most of those bikes are long gone… either junked out, parted out, or beat up. Every now and then I would see one pop up for sale but most of the ones I’ve seen over the past 15 years or so are either beat up with a million miles or people want stupid money for them.  I’ve never really “looked hard” but always thought it would be cool to have one. Often times I’d see the pic of my Gpa in my studio and do a quick search and see what was out there…  usually nothing.
A few days ago I opened up Facebook on my Computer and I see this Marketplace ad for a “1986 Harley-Davidson Heritage Softail” so I click it and this is what I saw…

I couldn’t believe my eyes. Wow, that’s in great shape, I wonder where its located? (conversations with myself in my head and all)
Whoa! It’s only 30 minutes from my house?!?!
It must have a ton of miles on it I think to myself…

What?!? 14,510 miles?!?!?!?
A 35 year old motorcycle with 14k miles?? NO WAY!!!
He probably wants a fortune I think to myself but then I see the price:
$5800 or best offer?!?!?!
Ok, now I’m getting a little excited so I reach out to the guy.
You still have the bike? Can you give me a little history on it and the VIN? (message sent through the FB ad)  He gets back to me the next morning and a little background on it saying “the bike belonged to my buddy who got it from his father that passed away in 2013 but he moved to to Alaska…”
He sends me his number via messenger and says to call him when I can for details.
In the meantime I’m looking at the pix…   It’s not perfect but certainly good for a 35 year old motorcycle, “mostly” stock and not overly molested as so many old bikes are. 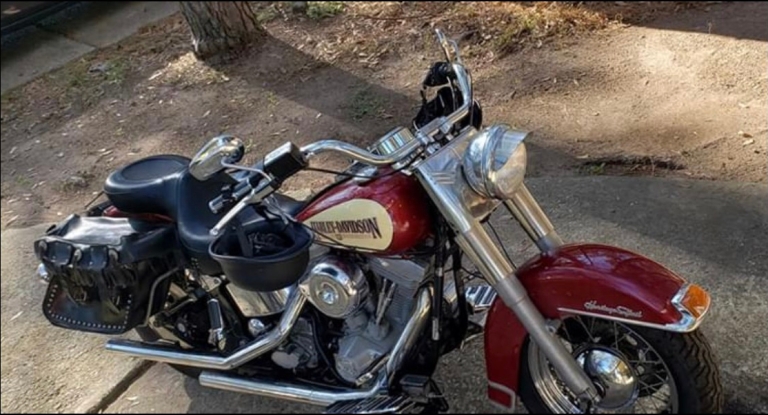 In the meantime I do a history report check (actually I did 3 just to be sure) and based on the History report it seems to check with the timeline and story he told me. No issues on the report at all.

Here’s where the story gets REALLY good…
I called him after doing the Car-fax and the guy fills me in on the REST of the story and the history of the bike.
It turns out the son actually bought this bike brand new FOR HIS DAD as a gift. I had assumed the Dad bought it and the son inherited it after his fathers passing but it was actually a gift TO HIS DAD in 1986.
I thought that was really cool especially since the main reason I’m interested is because of my own Dad’s history with the same bike.
Told him I wanted to come take a look  at it but never told him my “Dad” story as it relates to that specific bike.
Just as we’re about to hang up the guys says to me  “oh, BTW, the paint on the tank is custom” and I’m like, ooooookkk here we go (expecting the worst) but he went on to explain the Son wanted to make the bike “one of a kind” for his Dad while still protecting it’s integrity so he had a very subtle message painted on the tank.
I asked him before we hung up to send me a picture of what he was describing to me because I expected the worst. I expected full on cheese.
A few minutes later I got a text.
I couldn’t tell what it said on my phone (50 something eyes and all) but when I zoomed in I couldn’t believe what I was seeing…
Does that say Dad?!?! 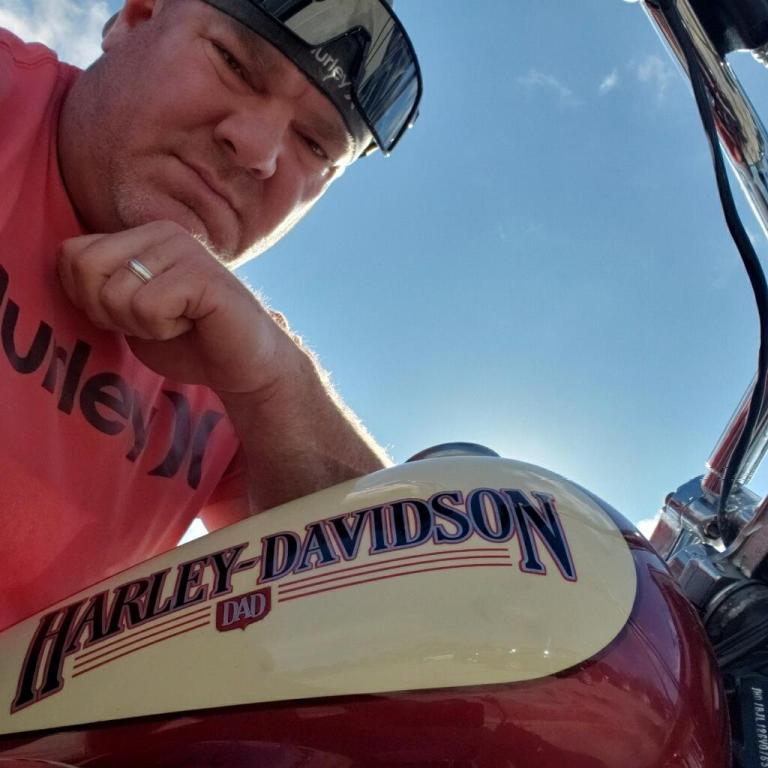 WOW!
Talk about one in a million! Heck, not even one in a million it’s ONE OF A KIND!
Not only is it a bike that I had “someday hoped for” but it’s 30 mins from my house, only has 14k miles, the price is great, and the real kicker is the “Dad” story which is something you simply cannot buy.
It might sound crazy I know but I kinda got emotional when I saw “Dad” on the tank… It was almost as if God was saying to me, “see, if you just wait and trust me I’ll do more than you can ask, think, or imagine…”
After all, isn’t that what a good Father does anyway?
So I made the guy an offer…
He took it. 🙂 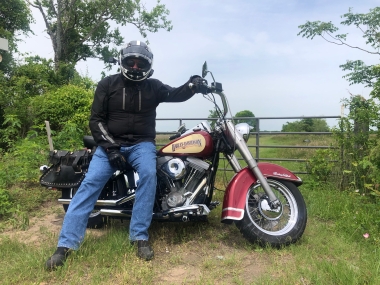